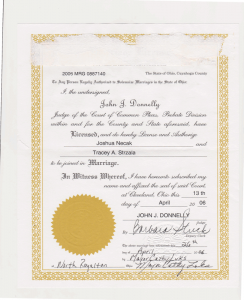 Ironically, in 2017, while the foreclosure was pending and without receiving any additional proof of Mrs. Necak’s name change, SPS unilaterally updated her name on the account. SPS’s simple name change just a year earlier would have allowed Mrs. Necak to accept the modification and avoid foreclosure. Because of this refusal, the parties engaged in over two years of contentious litigation culminating in a bench trial in Medina County. After trial the Court held that fairness did not permit U.S. Bank to foreclose on Mrs. Necak’s home.

The Court found that “all relevant information is clearly visible” on the marriage license to prove Mrs. Necak’s current name. U.S. Bank objected to the magistrate’s decision, stating that it could only find one other instance in Ohio where a Court made such a ruling in favor of a homeowner. Despite its rarity, the Court, in a landmark decision, overruled U.S. Bank’s objections and dismissed the foreclosure. Click here to read more of what happened to Mrs. Necak. Mrs. Necak’s counterclaim for promissory estoppel against U.S. Bank remains pending awaiting trial. Please contact Attorney Sean Kohl at Kohl & Cook Law Firm, LLC for further questions and continue to follow www.kohlcook.com/news for updates on this case.